The Bitcoin Bull Run Will Commence if BTC Breaks Above $6,400

The Bitcoin Bull in crypto markets have continued to extend their upwards momentum as Bitcoin surged to fresh year-to-date highs, leading most major altcoins to rip upwards. This positive price action marks a significant rise from BTC’s recent lows, which were set after news broke regarding the widely publicized Tether-Bitfinex imbroglio.

One prominent technical analyst has now set $6,400 as the price at which Bitcoin must break above in order for the bull run to officially commence, and the crypto’s growing technical strength may be just enough to push its price above this level.

Today’s surge has put Bitcoin’s price at a fresh year-to-date high, with the previous high being set in the $5,600 region just prior to the drop that came about as a result of fear surrounding the New York Attorney General’s accusation that Tether and Bitfinex have defrauded investors.

Although many investors at the time believed that this revelation would put Bitcoin’s position within the $5,000 region in jeopardy, the markets shrugged the news off and have advanced higher ever since.

Peter Brandt, an extremely popular analyst who covers a wide variety of assets and markets, noted in a recent tweet that Bitcoin is currently forming some technical formations that are quite similar to those formed in previous years prior to other bull markets, which may mean that further gains are right around the corner.

“The last time Factor’s benchmark weekly MA was in the current profile of turning from down to up was in Nov 2015 just as $BTC began its move from $340 to $19,800,” he explained in a recent tweet. 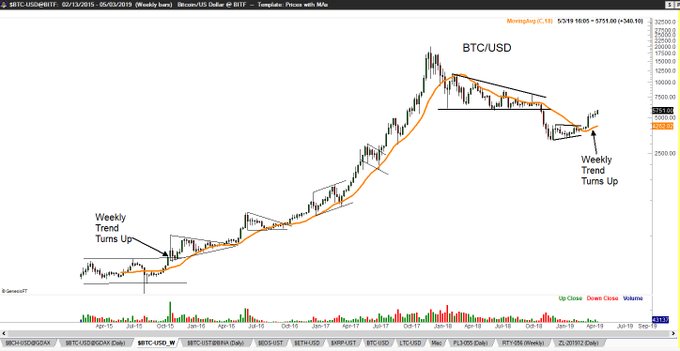 In addition to contributing to growing technical strength, the recent Bitcoin bull surge has also brought the cryptocurrency very close to a price level at which the next bull run will officially commence, according to one analyst.

Alex Krüger, a popular economist who focuses primarily on cryptocurrencies, discussed this price level in a recent tweet, noting that a break above $6,400 would mark the beginning of a fresh bull market. 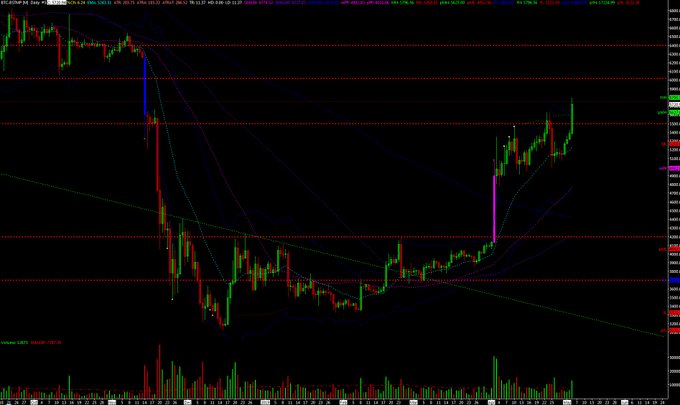 It remains unclear as to whether or not the crypto market’s current upwards momentum will be enough to break past the $6,000 region, where some resistance likely exists, and to surge past $6,400.

Regardless of this, it is becoming clearer that the bear market has truly come to an end, and it is only a matter of time before the markets reach a point at which their next parabolic ascent begins.