Bitcoin Network Assessing Its Health and the Reasons Behind its Recovery

Bitcoin Network:  Canaccord Genuity Group, an independent financial services firm, released a report about the health of the  network as of May 2019. The report examined the market by using four fundamental transaction indicators.

Daily estimated USD transaction value, confirmed transactions per day, average transaction size, and a daily number of unique addresses used were the key data points used in the report. Since BTC hitting a bottom in the low $3,000s, all four indicators point to steady recovery over the last couple of months. Furthermore, interest in buying BTC in emerging markets is also growing, mostly because local currencies in countries like Venezuela and Argentina are continuing to lose value compared to the US dollar.

The most interesting segment of the report, however, was the comparison of two BTC’s cycles, the period between 2011 and 2015 and the period from 2015 to May 2019 that seem to share many similarities. Just a brief look at the graph below is enough to observe a strong parallel in BTC’s price performance between the two time periods.

Although the comparison between the two cycles relies mostly on simple pattern recognition, without strong fundamental analysis backing it up, it appears that the four-year cycle strongly corresponds with the halving of BTC’s mining rewards, which takes place approximately every four years. Because of this observation, according to the report, BTC seems to be operating on a four-year cycle of sorts.

If the same trend was to continue and we are indeed going to see a repeat of BTC’s price action from 2011 to 2015, we are likely to witness a prolonged climb back to its previous ATH, which will eventually be reached in March 2021. It is worth noting that BTC’s recovery is at the moment actually ahead of schedule when compared to the previous four-year timeframe.

What are the Reasons Behind the Recovery?

Canaccord Genuity lists several potential catalysts responsible for BTC’s speedy recovery. The first reason is the asset management giant Fidelity’s continued effort to provide a fully fledged enterprise-grade digital assets service. According to a survey conducted by Fidelity, out of 411 US-based institutional investors that were surveyed, 40% responded that they are open to including crypto assets into their portfolios over the next five years.

In anticipation of institutional capital coming into crypto, Fidelity already launched its Digital Assets division last October as well as a custody service in March of this year and is planning to unveil an institutional digital assets trading business within the next few weeks.

Another potential reason could be Grayscale’s “Drop Gold” advertising campaign, which is targeted at digitally native investors, who might be persuaded to choose BTC over gold as a store of value, which is mostly immune to government interference.

Numerous crypto projects initiated by various corporate giants, such as Facebook’s stablecoindevelopment, Nike’s “Cryptokicks” trademark, and others, are undoubtedly also contributing to the recently heightened interest in cryptocurrencies with a substantial amount of media coverage they managed to generate.

Bitcoin is the Best Performing Asset of 2019 (BITCOIN NETWORK)

Not only is BTC one of the best-performing digital currencies of the year, but it is also one of the top-performing assets in general, leading crude oil, tech stocks, and other traditional assets by YTD returns.

What bear market? #Bitcoin $BTC has outperformed most traditional asset classes since the start of 2019 ???? pic.twitter.com/sgLxKJhaST 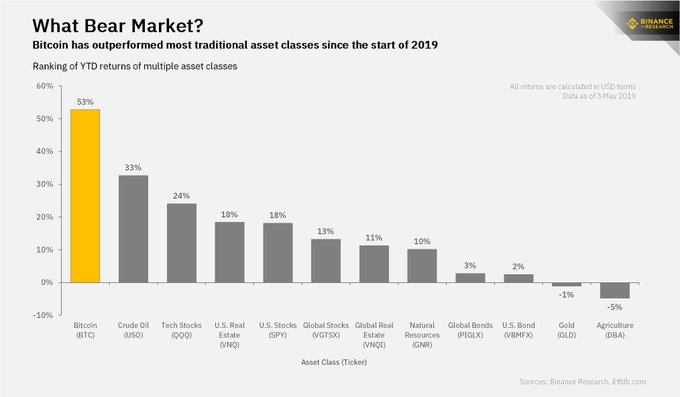 What bear market? #Bitcoin $BTC has outperformed most traditional asset classes since the start of 2019

443 people are talking about this
Disclosure: Opportunistic fraudsters are taking advantage of this market, offering investments in cryptocurrencies and doing everything they can to defraud unsuspecting victims, Anyone who invests in cryptocurrencies should thoroughly research the company they are choosing to invest with to avoid scams.