Analyst: Bitcoin and the aggregated crypto markets have been on an explosive upwards surge over the past several weeks, with BTC surging to fresh year-to-date highs while many altcoins catch the tailwinds of its upwards momentum.

Although many traders are closely watching for another pullback before entering into fresh long positions, one prominent analyst believes that BTC may surge to over $8,000 in the near-future before incurring any significant pullback that constitutes a correction.

At the time of writing, Bitcoin is trading up over 12% at its current price of $7,800, up significantly from its daily lows of $6,900 which were set yesterday after Bitcoin dropped due to facing increased selling pressure around $7,500.

Although yesterday’s drop to below $7,000 led many traders to believe that the cryptocurrency’s upwards momentum was in jeopardy, the drop acted as fuel that allowed the crypto markets to continue surging to set fresh year-to-date highs.

Over a seven-day trading period, BTC is trading up from lows of $5,700, and is currently showing few signs of hitting any significant levels of resistance around its current price levels, which may signal that a further surge is imminent.

Josh Olszewicz, a popular analyst on Twitter, shared his thoughts on BTC’s current price action in a recent tweet, explaining that Bitcoin currently has upside resistance at roughly $10k when looking towards the cryptocurrency’s kijun line.

“1W $BTC kijun didnt hold as resistance. The only upside resistance left is cloud at 10k. Not saying it’ll happen, but probability of a cloud touch increases if kijun is breached. This entire move on the 1W is now much different than 2013/2014/2015,” he explained. 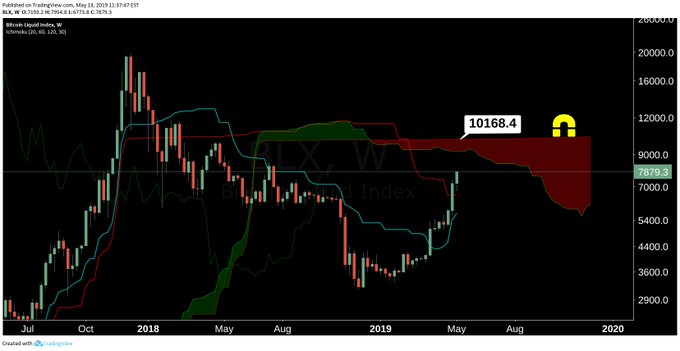 the only upside resistance left is cloud at 10k

not saying it’ll happen, but probability of a cloud touch increases if kijun is breached

Although there will inevitably be pullbacks after large upwards swings like the ones the crypto markets are currently experiencing, Bitcoin may still have some fuel left that will allow it to surge higher before it faces any significant levels of resistance.

Josh Rager, another popular cryptocurrency analyst on Twitter, spoke about this possibility in a recent tweet, noting that the next target of “serious interest” exists at $8,200, with a downside support region existing at roughly $6,400.

As the week continues on and it becomes increasingly clear as to where BTC’s next levels of support and resistance exist, it is likely that analysts and trader alike will gain a better understanding of the current surge’s longevity