Invest In Bitcoin: Gold has been the most preferred investment asset for steadiness and stability for decades; however, the pattern seems to be changing. Crypto funding platform, Grayscale claims that the young generation is breaking the trend and moving away from gold investments.

In a tweet on Friday, the company said that the market players must study the investment patterns of the young generation. Grayscale has been propagating crypto investments for a long time. 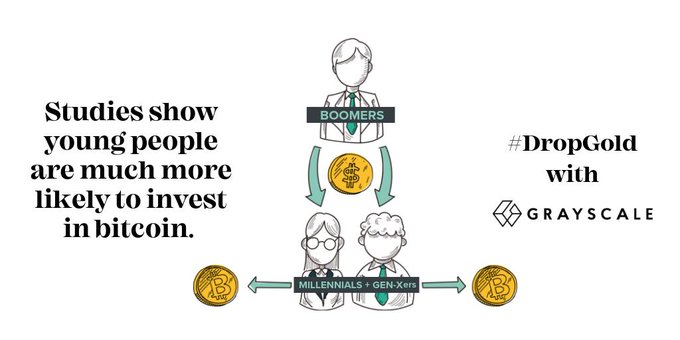 With a generational shift in wealth underway, it’s important to understand the next generation of investors’ mindsets. #DropGold http://gryscl.co/2Hxe9kb

In a decade since its launch, Bitcoin has become one of the most valuable investment assets across the globe. Though it has its fairs of ups and downs, it has mostly been growing, except for the crypto winter of 2018. Also, the techno appeal of cryptocurrencies is more attractive for young guns, than the age-old golden metal.

In the article linked shared in the tweet, Grayscale gives a deep analysis of how the generation shift is also felt in the investment sectors, as more and more new buyers are coming in for cryptocurrencies, mostly Bitcoin, rather than for gold. In fact, gold prices have been more or less stagnant over the past several months. It said,

With an estimated $68 trillion in generational wealth changing hands over the next 25 years (including $48 trillion from Boomers), we may see more investment dollars make their way into uncorrelated assets like Bitcoin… The Age of Bitcoin has only just begun, and the only better time to invest was yesterday.

Crypto companies have a huge opportunity in young investors, as they are willing to take chances in cryptocurrencies, and all look at digital tokens as possible future substitutes of traditional monetary tools. However, despite this, there is a dearth of a substantial study on the investment patterns among the youth, especially from the perspective of digital currencies. Extensive studies will help marketers approach people in the right way, which the young minds could be convinced with.

For convincing people to invest in Bitcoins, Grayscale lists several positive factors like strong fundamentals, the young age of market which promises growth of a long time, and diversification of assets.

Bitcoin Investment 2020:Analyst Explains Why Bitcoin Is About to Go Vertical to $17,000

Bitcoin Investment 2020 : Over the past few days, Bitcoin has been flagging. Ever since it peaked at $10,300 on Wednesday, it has been mostly downhill, with the leading cryptocurrency falling off a cliff on Read more…