BTC PRICE: As Long as Bitcoin Holds Above $6,400 The Case for BTC Bulls is Strong

BTC PRICE Despite briefly dropping below $7,000 earlier this week after incurring a sudden influx of selling pressure, Bitcoin has been able to hold steady above $7,000 and has since tepidly advanced higher.

Although many analysts and traders alike believe that the upwards momentum Bitcoin has incurred over the past several weeks was put into jeopardy by the recent drawback, one prominent analyst believes that Bitcoin is still bullish, so long as it holds above $6,400.

Over a one week period, Bitcoin is down from highs of nearly $8,400 which were set this past Wednesday. Although this price was a fresh year-to-date high for the cryptocurrency, its bulls were not able to extend the cryptocurrency’s upwards momentum, which has since slowed significantly.

Despite this, the recent pullback may actually be bullish for BTC, as it may allow the crypto to garner greater levels of buying pressure that could ultimately allow it to continue surging higher as it continues recovering from its 2018 lows of $3,200.

“In fact, bitcoin is looking extremely ‘overbought’ in the short-term. So, for the sake of healthy price action, bitcoin will either need to correct itself or, ideally for the bulls, consolidate for a while before it makes further gains,” he said just prior to the recent drop.

Analyst: BTC Price Still Bullish as Long as It Holds Above $6,400

The recent drop has led many analysts to have conflicting opinions as to whether or not the latest rally is emblematic of the early stages of a long-term bull run, or if it is simply a fleeting bull trap.

Don Alt, a popular cryptocurrency analyst on Twitter, shared his thoughts on BTC in a recent tweet, noting that he will be bullish on the crypto as long as it holds above $6,400.

“$BTC weekly update: Resistance rejects, support supports. And people say TA doesn’t work. As long as 6400 holds I’ll be a better perm-bull than Parabolic Trav ever was. This still looks gorgeous to me and I won’t touch the red button for quite a while,” he noted.

After breaking the much anticipated 6000 level BTC still looks amazing.
Trend, momentum and sentiment are all clearly bullish.

That said it’s at resistance and a pullback would make sense.
I’d much rather be a buyer at support than a seller at resistance. 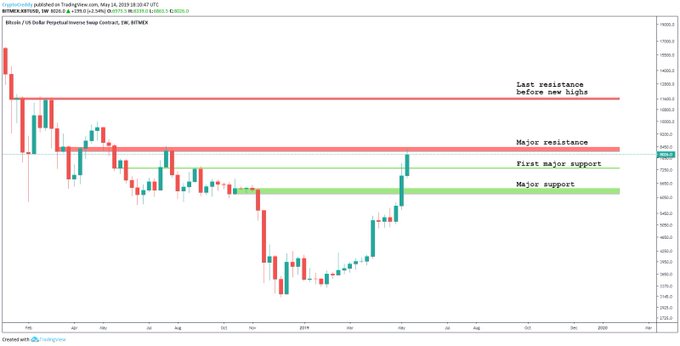 Resistance rejects, support supports.
And people say TA doesn’t work.
As long as 6400 holds I’ll be a better perm-bull than Parabolic Trav ever was.

This still looks gorgeous to me and I won’t touch the red button for quite a while. pic.twitter.com/hVRmD40vjJ

134 people are talking about this

As the weekend continues on and Bitcoin’s price action continues to unfold, analysts will likely garner greater insight into how significant this recent price surge will be in the long-term.

Bitcoin For Investment : Studying Bitcoin wallets and the number of BTC they hold shows evidence of a growing pattern of accumulation of the digital asset. The number of Bitcoin addresses with a balance of Read more…

Cryptocurrency Investment Funds: Another week, another round of Crypto Tidbits. The past seven days have been quite, quite exciting for Bitcoin and its ilk. Per data from Coin360, BTC has gained 11% in the past week, rallying Read more…