(BTC) Bitcoin Price: Market corrections are a natural part of their movements so we should not be surprised when they occur. Analysts and traders have been predicting this all week and it has finally been set in motion as Bitcoin and crypto markets tumble today.

Total market capitalization has declined by over $30 billion in 24 hours as mass profit taking occurs from assets that have been on fire all week. From a 2019 high of $264 billion yesterday market cap has dumped to $230 billion today as cryptocurrencies shed double digits. The slid has been expected however and markets are still up over 33 percent since the beginning of the month.

The bitcoin price drops to $7,000 as crypto falls (source: coinmarketcap.com)

Bitcoin has doubled in price since the beginning of April so a pullback is healthy and actually needed. Over the past few hours BTC dumped 10 percent, or a thousand dollars, back to just below $7,200. The sharp decline was triggered during the morning’s Asian trading session following a day with Bitcoin trading just below $8,000.

Crypto traders and analysts are now turning to the charts to look for support levels which will represent new buying zones. Trader Josh Rager observed the fall in Bitcoin’s dominance as altcoins surged yesterday;

“$BTC Dominance move down to 52% or below would continue to be extremely bullish for altcoins in the coming weeks,”

At the time of writing BTC dominance was at 56.3 percent, it had peaked out at almost 60 percent earlier this week, which is a seventeen month high. Rager added that the CME futures gap had now been filled and Bitcoin had hit its support level at the bottom of it; 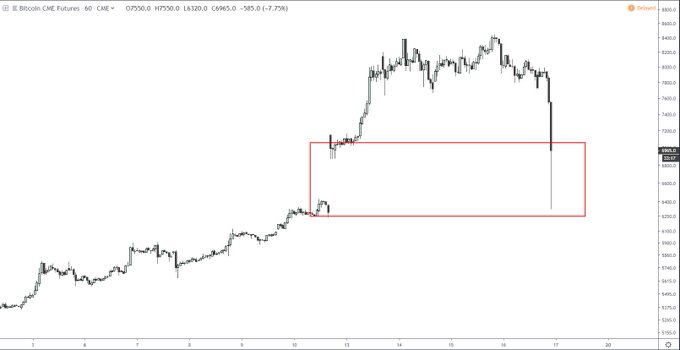 This is very bullish

Even bigger support levels for Bitcoin lie around $6,400 so this would be seen as a new entry point for many traders. Civic CEO Vinny Lingham noted;

“We’re in a Bitcoin recovery phase right now, since the $3100 bottom. Dips should be seen as good buying opportunities, unless we drop below the $6200 support level. Watch out for network congestion and fees hurting this run in the mid term if it moves up too quickly to test $20k.”

We’re in a Bitcoin recovery phase right now, since the $3100 bottom. Dips should be seen as good buying opportunities, unless we drop below the $6200 support level. Watch out for network congestion and fees hurting this run in the mid term if it moves up too quickly to test $20k.

116 people are talking about this

Most are of the opinion that this dump is bullish and will result in further gains if the uptrend remains intact. BlockTower Capital CIO Ari Paul noted “I’m not sure this dip is bullish, but one interesting datapoint: I was in a room with 30 crypto people and no one batted an eye. Strong underlying confidence.”

As usual the altcoins are getting hit harder. At the time of writing most of them were dumping double digits with XRP, Stellar and Cardano dumping 14 percent. Bitcoin Cash, Litecoin and Binance Coin had all lost over 10 percent on the day as the correction continues on red Friday.

The crypto market cap peaked at $263 billion and is currently at $225 billion.

Nicholas Merten is the founder of DataDash, a YouTube channel. The channel, which boasts over 300,000 subscribers, seems to be a popular place for Merten to present his position on cryptocurrency.

In a recent video, Merten forecasted the state of BTC, Ethereum, and Litecoin. He stated concerning BTC’s trading volume:

“It looks like the rally’s finally getting a little bit exhausted. I know that probably seems counterproductive with how well (BTC) Bitcoin Price been performing. But again, we have more than doubled off of the lows at $3,100. And we’ve gone to a point where we’re really just pretty much going parabolic on (BTC) Bitcoin Price. With a good amount of volume, I’ll give it that. But it’s not something substantial enough to where this is a new bull run.

And there’s really three different (BTC) Bitcoin Price ranges that I’m watching for a correction here at the moment… It’s really three different levels: $6,000, back to the $5,000 range – this would be a very neutral view in this case. But as I still hold, I think there’s a very good chance that over a longer-term decline, we could still come back down to this line of support [at $4,200]. It’s not something that would happen overnight, so I wouldn’t be too eager to go short Bitcoin or be bearish on it. But there is a very good chance as well that we could possibly hold here at $6,000.”

He also added that he believes that bitcoin’s price will decrease in the coming months and will experience a low in August. As for others, such as Galaxy and the Crypto Dog, they seem to believe that altcoins will experience positive performance.

Galaxy tweeted “I know I know, we all want (BTC) Bitcoin Price to chill tf down so we can have the long awaited alt party. It’s coming But first we gotta let the King do its job.” The CryptoDog also tweeted, “There are a million and one reasons for $ALTS to pump this week. I will be incredibly surprised if they don’t.”

This of course, was prior to the market plunging and bitcoin’s value in US dollars dropping down to levels that were previously a year high just three days ago.