Following a week of consolidation crypto markets have started to move again as Bitcoin grinds ever higher. The Friday momentum has pushed total market capitalization back towards the top of its trading range at $180 billion. Heavy resistance resides here though so further gains may not be forthcoming so quickly.

A couple of hours ago Bitcoin hit an intraday high of $5,550 adding nearly 3 percent on the day which is the highest it has managed for over a week. Heavy resistance in the form of the 50 week MA sits above it at $5,600 and it will be a challenge for BTC to break that. At the moment though, the sentiment is bullish. 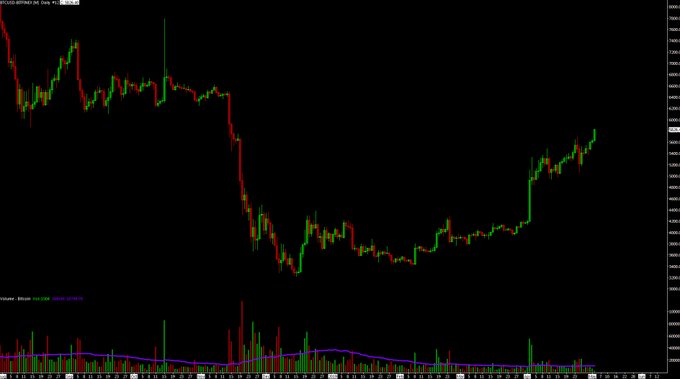 Ethereum has inched up a little in the shadow of its big brother. ETH is currently trading at $164 adding a couple of percent on the day. Ethereum has remained bearish for the past couple weeks despite a number of positive developments.

The top ten is largely in the green at the time of writing during morning trading in Asia. The biggest move has been made by Binance Coin which has added a further 7 percent on the day to reach $23.40. The rest are adding a couple of percent on the tail of Bitcoin aside from XRP and Stellar which are flat or in decline.

The top twenty is a little more mixed at the moment. Cosmos and Tezos are streaking out ahead with 13 and 8 percent added respectively as these two jostle for fifteenth place. Maker has also woken up again gaining 4 percent today knocking Ontology out of the top twenty.

When Coinmarketcap counted the circulation of ATOM tokens it instantly jumped into the top twenty. A subsequent Binance listing has kept the fomo going for this project which calls itself a “decentralized network of independent parallel blockchains.” It seems that as markets in general are picking up people are looking for the next newest thing for their fomo and Cosmos seems to be it at the moment. ATOM is currently priced at $4.90, up 13 percent on the day.

Aside from XTZ and BNB, ABBC Coin and OmiseGO are having good runs at the moment with 6 – 7 percent gains on the day. There are no double digit dumps at the messy end of the top one hundred but PAI and MXM are down there dropping over 6 percent each today.

Total crypto market capitalization has gained a further $4 billion on the day, or 2.3 percent. It is currently at $179 billion and approaching the top of the present trading range. Bitcoin continues to dominate things as its own market share has increased to 54.8 percent, its highest level this year.

Cryptocurrency Investment Strategies Analysts Expect Bitcoin to Fly Past $10,000 Because of These Key Factors

Cryptocurrency Investment Strategies: Bitcoin (BTC) is currently in the process of revisiting its recently established 2020 highs of $9,550, with its ongoing upsurge coming close on the heels of yesterday evening’s selloff that led the Read more…

Bitcoin Trading Investment: Reasons Why A Managed Trading Account Could Be Better for You

Bitcoin Trading Investment: When choosing to trade cryptocurrencies, or any other type of digital asset, users must always consider if they’re the right fit for the job. Trading any digital asset requires a lot of Read more…

Bitcoin For Investment : Studying Bitcoin wallets and the number of BTC they hold shows evidence of a growing pattern of accumulation of the digital asset. The number of Bitcoin addresses with a balance of Read more…